2 years ago I was laid in hospital for the first time ever, well technically the date I went in was the 6th of May 2015 and I stayed for about a week. After several months of umming and aaaing and no idea what was wrong with me. Lethargic, anaemic, swollen and with extremely sensitive nose like I had been in a fight yet I hadn’t, bleeding from the bottom and extrem pains in the stomach area. I started bleeding in December but because I had been told once several years ago that I had hemorrhoids I started treating that, but it didn’t give in and eventually I went to see a doctor, probably not until February time though. I am and always have been quite stubborn, I have never been one to complain about not feeling well and I will just carry on with life thinking it will pass. This is what I did for several months, thinking I’ll be fine, nothing bad will happen to me, its just silliness  and that’s why it dragged out so long before I saw a doctor. Doctor after doctor never looking at me as a whole but only looking at individual things, giving me different drugs which never helped any of it. One doctor said I had hemorrhoids, another said I had sinusitis, the next just giving me penicillin without really knowing what for. This went on for several months. Then finally one day I was lucky enough to see a retired doctor who finally took me as a whole person, listened to all of my problems, looked at me properly, took me seriously and told me “You look healthy but looking at your bloods you’re not”. She sent me on to a specialist within nose, throat and ears and there they took more tests, and gave me some steroids and a new appointment a few days later. I was a bit sceptical but thought what the heck, I was going crazy with all this shit. I took the steroids and noticed a difference, especially with regards to that awful swollen nose I had, which now disappeared. I remember thinking to myself, this is fantastic, I’m gonna get better now, that was all I needed and I’ll soon be back at work. Little did I know ey. When I went back for my next appointment they told me that they had arranged a bed in Lund and wanted me to to go there straight away. In shock I walked home and packed a bag, I remember thinking what on earth do I pack when I’m going to hospital and don’t know how long for? I had never been in the hospital before, except when I was born of course and then visits but that’s different. I called my mum in tears completely shocked by the news and called a close family friend in Sweden too as I needed some sort of support here. I remember packing my book, a notebook, a sketchbook and my knitting making sure I had plenty to take my mind off things with and keep me entertained. I also had to quickly get a cat sitter sorted for my lovely baby Olga who was barely a year old. Oh how I wished I could have taken her with me, she had been fantastic company all those days and weeks I was laid at home feeling sick. I got sent in on a Thursday, I remember it so well because I was doubly devastated because I had tickets to go see the dress rehearsal for Cirkus Cirkör but obviously couldn’t go now. 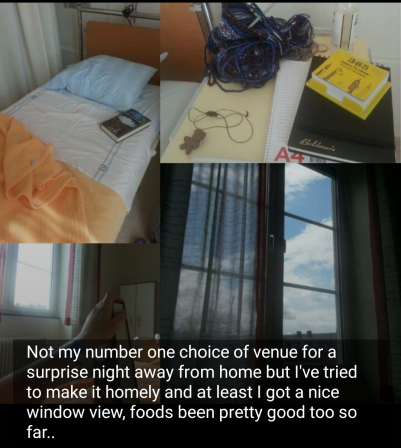 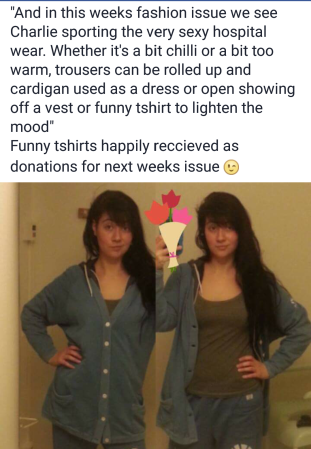 I was laid in the rheumatologist ward as they were worried that I had some crazy blood vessel disease named after some Nazi. I never dared to even look it up because I thought I would keep my head clear and away of speculations and scary thoughts. I think this was very wise! It was quite entertaining in one way laying on this ward, an experience. I was the youngest there by a mile as everyone was more towards 70+, and they were all so lovely. Every meal time they welcomed me to eat at their tables and have lovely conversation, really making me feel welcome and ok. The nurses were also really lovely on this ward. Apart from the obvious it was actually a pretty nice experience.
Looking back at my facebook memories of these days I cannot believe how positive I was and how I didn’t let things get to me too much, it was like water off a ducks back. I feel so proud of myself right now for my strength and courage. On the 5th of May 2015 I quoted on facebook;

Promise me you’ll always remember:
You’re braver than you believe, and stronger than you seem, and smarter than you think.

It is crazy to think that the me of 2 years ago could write this, completely unaware of just how true and fitting this quote would be over the following 2 years to come. Now that I read it again I have decided that this is a quote I need to have written somewhere where I can always read it and always remind myself of these very wise words.

The nurses had such a tough time trying to find a vein to get blood from me, but eventually it worked. I had so much blood work done I was worried I wouldn’t have any blood left. I had various scans done and my first colonoscopy. Now that was the worst experience ever. My mum and sister flew over to be with me, and luckily they were here on the Friday so I got to spend the weekend with them, at home even! Think that was one of the best things I had heard all week, that I could go home over the weekend! So after the weekend I obviously had to go back to Lund, and my poor mum and sister travelled between Malmö and Lund every day to be with me, and I am so grateful that they did!
In preparation for the colonoscopy I wasn’t allowed to eat in what felt like forever, and mum helped me with some hypnotherapy, I was terrified of the w 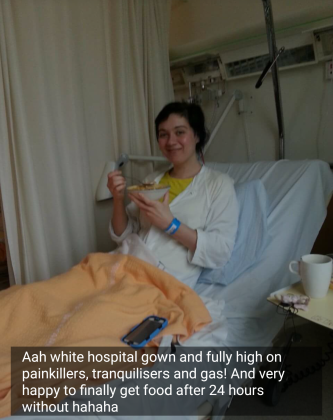 hole experience and with every right because it was one of the worst experiences ever! Luckily mum was allowed in with me so she could talk to me calmly and keep me in some sort of comfort zone. I was awake throughout the procedure with gas, calming and painkillers, but oh my, I felt when the camera bumped into each and every turn in my intestine, and eventually I felt the whole room turn into a rave, lights flashing and just felt myself panik. I remember hearing the nurse screaming “take the gas away from her!” I think I sent myself on a little gas trip. Either way it was horrendous! (My next colonoscopy I made sure I wasn’t awake and it was nowhere near as terrifying just for the record.) But oh my, I was craving a bowl of cornflakes after that colonoscopy and after not eating for 24 hours. And I’ll tell you what, it was the best bowl of cornflakes I ever had! (Baring in mind I hadn’t eaten cornflakes since I don’t know when). After all of these tests and scans etc they decided that I was in the clear of any blood vessel diseases which was a huge relief.

Jumping back in my story, I remember one time in January/February time, I struggled leaving the house for too long as I needed to rush to the toilet very often, and oh my did it hurt. I cannot believe I wasn’t more scared than I was and I carried on living life as normal as I could. Very embarrassing but I’m all about honesty…One day I had been out to buy some food at the corner shop, and felt how I desperately needed the toilet, and when that feeling comes on oh my does it and there is no controlling it. I tried running up the stairs, and I couldn’t get the key in the door and ended up having an accident right outside my door. I don’t think I have ever felt so ashamed as I did in that moment. There was no one there but I knew what had happened, I felt it was out of my hands and I knew something was wrong. That fear of it happening again is awful and it really left its mark. If I didn’t already always look for toilets when going out then I really started to do it even more that day, and I barley dared go out too far or to too busy places either. I’m a grown woman and couldn’t control it and didn’t know why, it was awful!

My doctor eventually rang me and told me that I had Ulcerous colitis. This was the first time I had heard about this and even though it didn’t seem as horrible as the original illness, it scared me. Now it was a case of find out what the illness was, and learn about it and how to live with it and what to do.. which I will write more about later.

Another side note, to think that I met Axel at the end of January, when I was ill and didn’t know what was wrong with me, and had no energy. He wanted to get to know this tired pale girl, took her for drives to the sea to get some fresh air, cooked her dinner, and came to visit in hospital. He barely knew me. He could’ve had a lucky escape and run away when I was all busy being ill, but he didn’t. For that I am very grateful.

In regards to the very strange swollen nose, the doctor later told me that the swollen nose was linked to ulcerous colitis and the inflammation of the intestine. They also told me that when the inflammation is severe it can spread to other body parts built up of similar matter, such as the nose, although the nose seems to be very rare and the doctor who saw me had only seen one other case with swollen nose in all his career, and he was of an older generation. It was actually Wegener’s granulomatosis that they were worried I had, and yet to this day I have never done any research into the illness.

Nasal manifestations in IBD are quite rare. They are typified by chronic mucosal inflammation, obstruction, intermittent epistaxis and occasionally septal perforation, signs and symptoms that are common to many disease states of the nose. Nasal findings, much like oral lesions can precede the more typical gastroenterologic manifestations of IBD, or parallel the activity of intestinal inflammation. The review of the literature, scarce, shows some cases of nasal involvement in IBD (especially CD) and few associations between these illnesses and other systemic diseases, such as vasculitides, collagen vascular diseases, sarcoidosis, Wegener’s granulomatosis or relapsing polychondritis. Among these diseases we can find atypical conditions mixing different features of the most classical systemic diseases, presenting as ‘overlap syndromes’. Regular follow up can help us to identify systemic disease with the research of new extra-sinonasal symptoms.