I did a thing and I am so so proud of myself!!!

Eeeee!!! Yesterday I held a talk at Lincoln University!!

A while back an old school friend sent me a lovely message asking if I would be interested in coming and holding a talk for her nursing associate students, where I could share my health story, experiences, feelings, well the works, good and bad. Just being asked was an honor of its own and I was so happy to be asked to do something like that, so of course I accepted and said I would love to. It was planned for a while back, but I had a mega dip at that point in time and had to cancel. I felt awful, I felt like I was letting her down, the students down and myself, however, I was in bed for 3 days just sleeping, so I know I wouldn’t have been able to give anyone anything useful. Now it’s finally happened though!

I am one of those aaaaawfully last minute people. Yes, I am extremely organised….in some areas, but then some things I just can’t do until the day before or something stupid….and that’s exactly what happened.  Sunday I was sat for about 10 hours, searching for pictures to follow my health time line, gather my thoughts, collect some information regarding IBD and ostomies so I could give them an insight into the illness as well as the different types of bags, so if they are to meet someone they might remember a little bit about it from my talk. Even though I am always so open about my health and what has happened it felt a bit odd going through it all in detail, finding images to show how things were and what I’ve done, both good and bad. It sort of became a bit of a reflection day for me, what I have done, how far I have come, and sometimes I didn’t even recognise myself… It’s a funny old thing, life…the things we go through, the things we talk about and the things we keep to ourselves, how we change from not saying much about one thing to sharing all and even more sometimes. I know I for one have really changed… Anyway, 10 hours of sweat, swearing, tears, headache, nervs, no appetite, loss of words and god knows what else, I was nearly done. I have not used powerpoint in years, so that in itself was a task, and trying to make the slides interesting, so if they got bored of me talking, they could at least have something to look at. Haha, oh my how many pictures I have of myself I realised… I know it’s over like 5 years but still..there was a lot.. it almost felt embarrassing, but then again, if I didn’t have them then I wouldn’t have been able to make a slide show of my life hahaha. I had to call it a day eventually on Sunday, and just did some finishing touches on Monday, including having my sister proof read it so it made sense. Man you could really tell I was tired when writing it, I had made all sorts of words up haha! I then had to go through the slides, write a few notes down so I would remember some things I found important and didn’t want to risk forgetting. I ended up with 4 pages of notes, for my 38 slides…yikes. I was so nervous about not being able to talk for long enough too. The amount of times I have told people my story and tried to reduce it to a 5-10 minute story to not loose the other party’s concentration, bore them or seem like I just go on forever, meant that I had no idea how long an actual talk would take and if I could make it long enough to be worth while.. I also didn’t want to try to practise it at home because I was worried if I did then maybe I would have got it all out of my head before the real talk and would just be stood there not knowing what to say… so instead I spent all of Sunday as an extreme nervous, stressed mess, with a crazy whirlwind of nervs in my stomach, and Monday, when the slides were finally all done, my nervs came and went like some crazy roller coaster. Sleep on Monday night was a bit hit and miss, I’m not going to lie, I did take some natural sleep help remedies because god knows if I’d have got any sleep otherwise. That little shy girl that lives deep down inside me does have quite a strong voice when it’s just the two of us, and she was shaking with nervous fear.
D-day morning arrived, and I woke up in some false sense of security, as I came downstairs to have a cup of coffee and try to eat realisation slowly started to hit me… ‘I’m going to be talking in front of university students about myself , aaaaah’. My sister gave me the best advice ever…‘just don’t think about yourself, think about what they are learning’… yeah that’s great Samantha, but my talk is about me, a bit hard not to think about myself hahahahaha but I knew what she meant and I got a good little giggle about it. But daaaaaaamn my silly rectum, those nervs going straight there too, making me feel like I needed to toilet, which meant, I just had to go sit there until the feeling disappeared..

My drive to Lincoln was alright, took me roughly an hour and 10 minutes, of which I blasted out some powerful happy songs to keep my mind off what I was going to do and to try to build up my confidence a bit. Of course I got stuck behind slow lorries and tractors, and when finally in Lincoln I ended up at the wrong parking place. The security guy didn’t have all his sheets so had to call his boss, and then couldn’t pronounce my name but eventually it all got sorted and he drew where I was meant to go on a map, making sure I definitely found it, and off I went to the right parking. All of this making me that little bit later than I had hoped for. I found it, in the end but ended up having to walk a good 20 minutes to the lecture room. I think that walk might have done me good, fresh air, a good stretch after the drive and sort of, hopefully, cleared my head a bit, in an attempt to shake the nervs.
When we walked up to the classroom the students were in there already and I felt how my nervs went bananas again. I just had to try to remember to take deep breaths and stay calm, I mean, this is something I know, and no-one can tell me I’m wrong about it either as it is my story. That thought still didn’t really help settle my nervs though.
I got my powerpoint presentation up and sorted, looked around the room and saw a load of smiling faces looking back at me. With a deep breath and a bit of a wobbly voice I started to talk. I listened to my mums advice and looked just above their heads so I didn’t get eye contact and get super nervous, but after a little while I felt pretty nervously relaxed and was managing to make eye contact with the smiling faces in front of me, eagerly listening to my story. Time went by fast, I was talking at a normal pace. Before I got there I had decided I was going to talk slow, take my time and remember to breath so I didn’t rush through my story in like 15 minutes, but that was all forgotten about, and it all just came flowing out of me. When I finally got to my final slide, and thanked everyone it was time for questions. At first it was quiet but then the questions just started rolling in and it wasn’t until then I realised how much time had gone by. I had been talking none stop for 2 hours. 2 hours!!! Yikes! 2 hours just about the last 4 years of my life, but not all my life, just about my life with UC and Stevie the stoma. Yes I did realise throughout the talk that I had forgotten some things, but I guess it’s difficult getting everything in when you aren’t totally sure what you’re doing, how long its going on for or if it is even relevant. That was mind blowing though. It felt amazing. The feedback I got was incredible and really gave me a boost and, yes totally selfishly, made me feel pretty damn good. It also gave me another push to keep posting and to keep raising awareness. One woman came up with a little letter she’d written to me, thanking me and telling me I was an inspiration. A few of the other students came up one after the other and thanked me, telling me how it hit home and told me a little about their personal stories or experiences. I got asked for some advice, as well as thanked for giving them an insight into a world they didn’t really realise. The best thing of all, was hearing how most of them said how they would have more patience with the patients they meet when they are working, and how they have a greater understanding for certain things now too. I was so moved and felt the tears welling up in my eyes.

I was on such a high when I left. I was buzzing. This was truly up there with one of the most rewarding things I have done, and I really hope I have made an impact and can help these wonderful student nurses to become ever more caring, understanding and lovely than they seemed to be!

When I got home, after another hour and a bit drive, I was totally zonked. I was physically, mentally and spiritually drained. I gave so much of me in the talk that there was nothing left in me when I got home, and I had to go straight in and collapse on my bed. But don’t get me wrong, it was the best kind of drained there is! I cannot wait to do it again, and I really hope I can do a lot more of them, and help raise awareness even more!

Nervous just before my car journey to Lincoln

I seem to talk a lot with my hands haha

It’s very pretty around Lincoln university and the weather was gorgeous, a sunny autumn day! 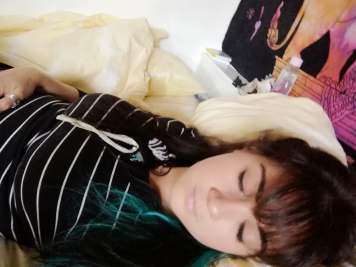 I was all knocked out once all the nervs were gone and I had survived it all, and my baby girl, Olga, was staying close by as she always does when I’m tired or unwell!

4 thoughts on “I did a thing, another first!”